Last weekend, wet, heavy snowflakes crashed hastily and horizontally against my icy window.  Today, sub-freezing temperatures force me into my heaviest winter coat, wool scarf fastened securely around my pale neck. For the past four months, my pre-war radiator has been heaving and gurgling like a life-long smoker, erratically and angrily spouting streams of hot air, mirroring my own heated frustration over this seemingly endless, brutally chilly winter season.

It is mid-March, right? Call it mismanaged expectations, but I usually associate St. Patrick’s day with outdoor festivities, the kind where beers taste refreshingly cold—and I don’t mean cold in the way that forces you to alternate hands for fear of losing a finger to frost bite.

Six months in New York has proved a wonderful adventure so far, but lately, I feel a pathological desire for warm weather. A guttural yearning for the skin-tingling sensation of sitting in the sun 10 minutes too long. I want to munch on fresh, tender summer greens. I want to greedily wipe sticky sweet juice from my mouth with the back of my sand-encrusted hand after eating a perfectly-ripe peach. I want off-the cuff, casual, indulgent, summer eating.

Last summer, before leaving London and embarking on my thesis, I had the tremendous luxury of traveling to Croatia with four of my dearest friends. The visit encompassed—and far exceeded—all the quintessential summer experiences I currently covet. Right now, that trip is just about all I can think about. 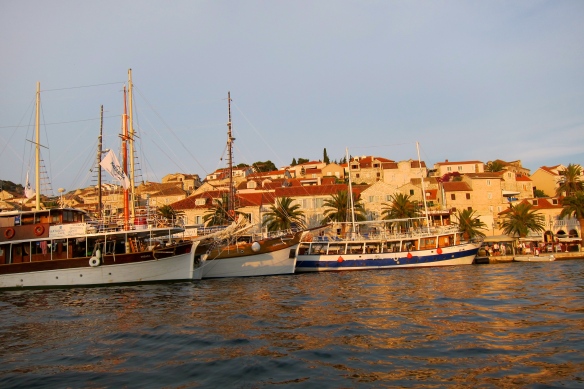 The island of Hvar is hugged by the Adriatic Sea, off the Dalmatian Coast of Croatia. I would say that it’s a hidden gem, but that would be misleading, because sometime during the last decade, the secret got out, and the small island has adjusted to and welcomed a steady and growing influx of foreign visitors.

The clear blue water, the string of rocky islands, the warm light. Honestly, it was so breathtaking, I felt like I had been transported directly from London to another (and much more pleasant) planet. Yet, Croatia (and Hvar) is still recuperating from a brutal war, and it is clear that it is still getting its sea legs as a hot tourist hub. This gives the city an earnest and authentic feel—it’s not cloyingly commercial, and is still relatively affordable on a student budget. I had arrived.

You can tell a lot about a city by its market, so when I travel, I always make a point to seek out the local food offerings. In Hvar Town, it didn’t take long to find, and when I arrived, I knew I had reached the mothership. 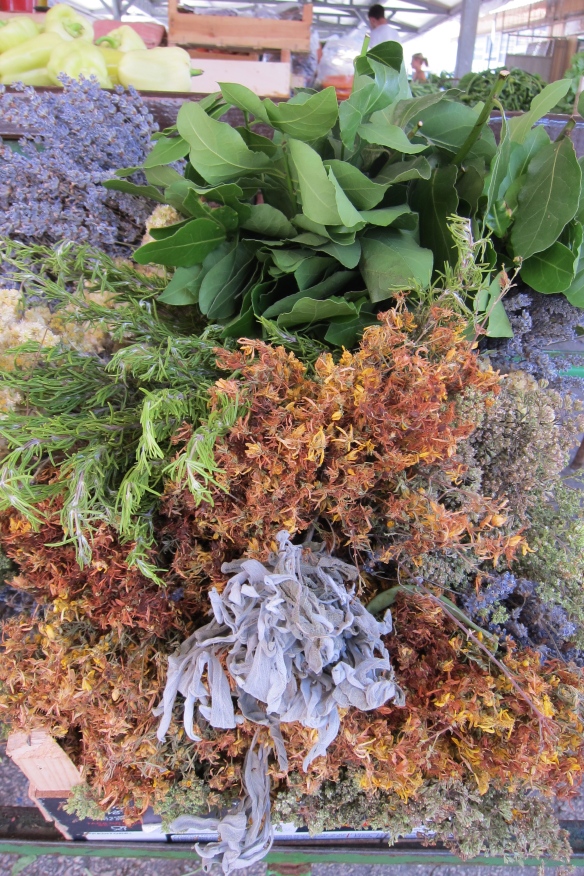 The market was small, like the island, and was nestled next to the pjaca, or town square. In many ways, this market was far more modest than markets I had visited in the US and abroad. 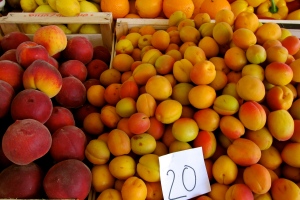 There were no small business owners hocking products or luring tourists. There were no “all organic,” “all local” signs to which I’ve become so accustomed. There didn’t need to be. This was a small town’s market, where local and organic food was the standard. Piles of fresh fruit—cherries, apricots, peaches, and raspberries—were stacked precariously high alongside home-jarred capers, honeys, and olive oils. Lush herbs like oregano and basil—with dirt still clinging to their roots—were intoxicatingly fragrant. 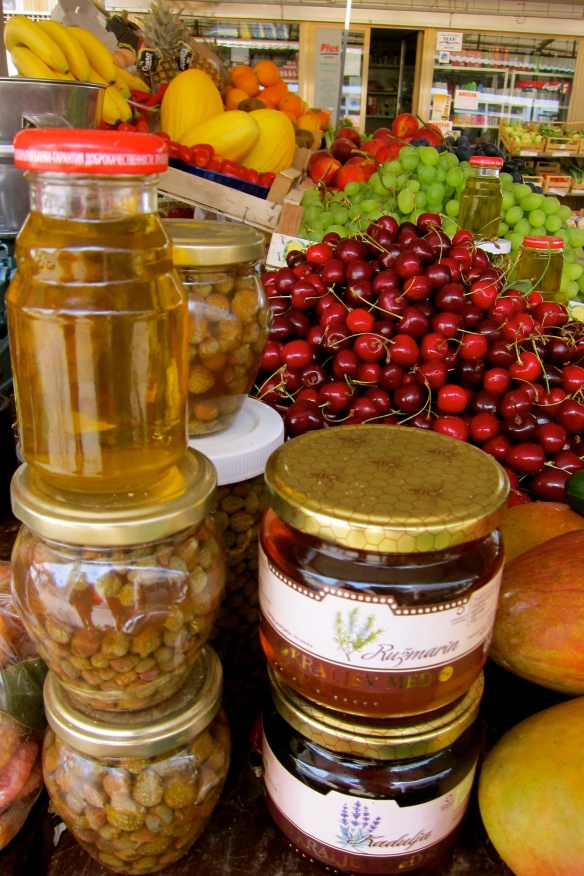 The periphery of the market was lined with small artisanal bakeries and shops, and I quickly found my home at Delicaie Mediterraneae. 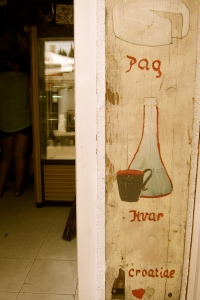 Now, this was a meat shop, a cheese shop, aaaand a wine shop. Not a single product in the store was grown or produced outside Hvar. It became a morning ritual to pick up fresh fruit from the market, then stop here to stock up on goods for a picnic lunch. 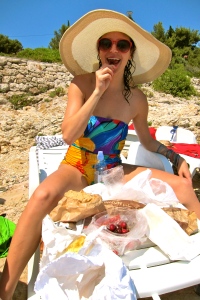 The father-son owners would carefully shave thin slivers of salty and rich cured pork onto their scale, portion hunks of creamy goats cheese, and package olive and sardine antipasti into a tidy and picnic-ready package. As we waited, we sipped complimentary wine and chatted about life on the Island.

No picnic is complete without crusty white bread and a little dessert. Pekarna Klas provided that fix. This was not the type of bakery where seedy, whole-grain breads were on the menu. Rather, it was all about chewy, white-flour confections. The bread was a perfect partner for the cured meat and cheese, but what I looked forward to every morning was the slastice—the Croatian version of a cream-filled doughnut. 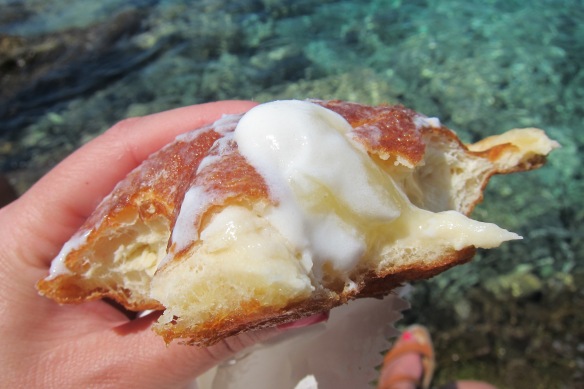 The dough was dusted with crunchy sugar, and was so light that it practically melted on your tongue. With each bite, it was impossible to control the outpouring of sweet vanilla cream. Napkins were an absolute necessity, and there was nothing more summery than finishing off a meal with one of these heartmeltingly delicious bad boys.

WINE-NOT END on a GOOD NOTE 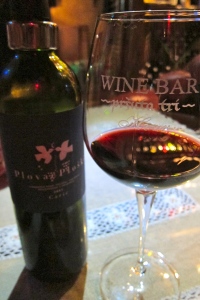 You don’t hear many people talking about Croatian wine, and that’s probably because it can be prohibitively expensive to purchase abroad. It’s a shame, because the terrain and climate in Croatia matches that of its famous wine-producing neighbor, Italy. What made our wine-drinking experience particularly memorable (and simultaneously hard to remember), was that every sip we tasted was produced right on the tiny island of Hvar. It doesn’t get more local than that. Our wine purveyor of choice was called Vina Caric, and not surprisingly, the wine bar in town was owned and operated the vineyard owner’s sons. These guys informally offered us a wine tasting, enthusiastically sharing every bottle alongside us. 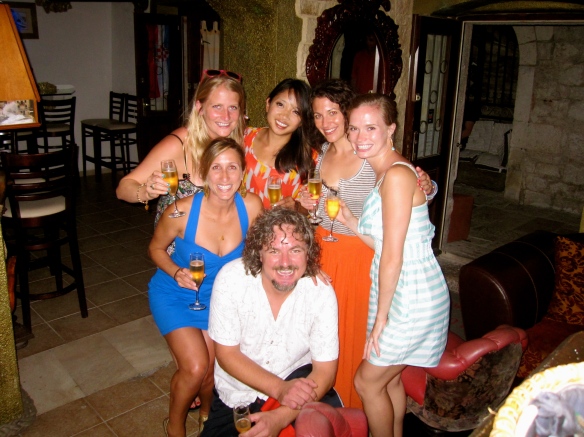 is called Plovac Ploski, which derives from the name of the grape variety, Plavac (Mali). The fruit comes from Hvar’s famous Plaze on the island’s south face. This full-bodied and earthy red should be served with “pasticada,” or seafood dishes and stews, which are usually tomato-based and ubiquitous on Hvar menus. This wine is utterly unfussy, yet has tremendous personality and caliber.  Plus, there is something about drinking wine grown from the very ground upon which you stand.  There’s something even more to enjoying that wine alongside a family-style, seaside meal with close friends.  I always drink to that.

4 thoughts on “Hvar, Hvar Away”